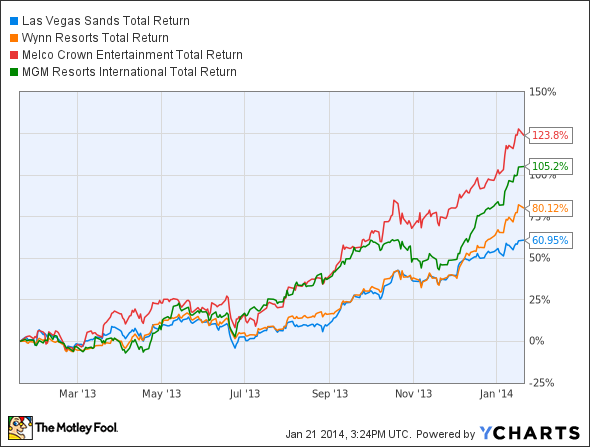 Casino stocks seem to be a tricky endeavor.

Illicit transfers of funds through Macau, China are being attacked by the country’s Ministry of Public Security. Corruption had run rampant in this gaming industry for some time. The crackdown on this practice has pushed corrupt party officials to move outside the country. The problem did not end there, though, as these officials have continued to funnel money out of the country through Macau’s casinos. The Ministry is attempting to block these transfers and have these people returned to China. The Economic Crimes Investigation will have access to all transfers from the casinos, and curtail illegal activity with this tool.

Macau had become a center of activity for extreme high rollers with unabashed amounts of money to spend there. The money and power led to corruption within the gaming industry and the party itself. Macau relies on gaming for upwards of eighty percent of its economy. There is now a push to diversify the revenue source for the area. The status of continued VIP and mass premium gaming are coming to an end. This reduction in high spenders has put a dent in the local industry. The casinos are averaging upwards of four percent losses, and the industry market is at its lowest in ages. There is certainly a concern of not only this industry, but the national economy taking a hit also.

Macau, a former Portuguese colony has deep seated issues of suspected crime. A further push to better regulate gaming there is being taken head on. The path to change and diversification is receiving a boost from western casino and resort interests. The push for more global entertainment venues is hoped to bring more variety for interested tourists. The Sands China and Galaxy are trying their hands at luring people with high end shopping and other entertainment availability. The drive to lower the stakes involved should decrease the need for corruption at most levels.