Eight Passengers Killed in a Casino Coach that Crashed near Laredo, Texas 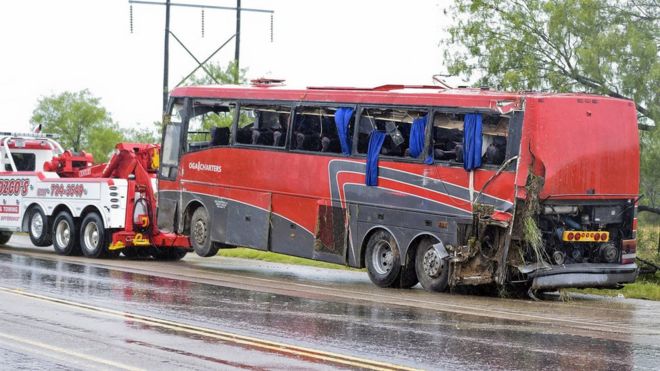 A total of eight people were killed as well as 44 other people injured when a coach that was carrying many passengers to a Casino crashed in the United States state of Texas.

The police that were at the scene state that the driver of the coach lost control of the vehicle and the bus rolled over on Highway 83 approximately 46 miles north of Laredo, Texas. The police also stated that there were no other vehicles involved in the crash.

Seven passengers passed away at the scene of the accident while one other passenger passed away later while in the hospital.  The driver of the coach was among those who survived the crash.

The police at the scene of the crash stated that the actual cause of the accident is being investigated.

The coach involved in this accident was carrying a total of 51 passengers; this vehicle was owned by OGA Charters and was on its route to a casino that is located in Eagle Pass, Texas that is approximately 125 miles North West of Laredo, Texas, stated by reports in the Laredo Morning Times.

Greg Abbott who is the Texan Governor released a statement expressing his condolences.

One of the Troopers who is Conrad Hein that was on the scene of the accident and part of the Texas Department of Public Safety stated that their troopers are going to fully look into what happened in this accident but will definitely take them some time to get to the answers.

Conrad Hein of the Texas Department of Public Safety also stated that the rain had affected the area on this Saturday Morning but it was still unclear if the rain was an actual factor in the accident.